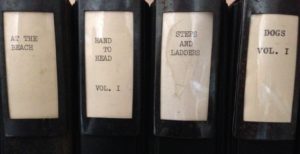 I grew up in a household with many scrapbooks, filled with carefully labeled photographs that were held in place by photo mounting corners. My mother was the main one tending to the numerous ongoing volumes that chronicled our family life, but my father also carefully stored the albums that covered his life from infancy through college, the Navy, and the workplace. (The later years tended to feature less photos and more bits of ephemera and lists, including one of all his jobs and what he was paid.) The first albums that are devoted to our burgeoning nuclear family were purchased from a company that provided sturdy books with their own slipcases. Customers could also order gold-stamped labels for the spines, which my parents did. This series of what would eventually be five volumes was given the title “The Happy Years” and each one them bore a subtitle: “Jane and Frank,” “Now We Are Three,” Our Family of Four, “And Twins Make Six,” and “School Life Begins.” I entered the picture as the character revealed behind the word “Three.” The scrapbooks thereafter change styles and manufacturers every few years, my mother never fully getting over her disappointment that that original company went out of business.

Once I had a camera (a Brownie Hawkeye) and began generating photos of my own I followed in the family tradition and began putting them into a scrapbook. It had black pages and I used a white pencil to caption each image. However, it didn’t take very long for me to encounter what turned out to be an impossible obstacle. I’d been affixing the photos in chronological order, but later I’d find a photo or some paper keepsake that I’d missed and should have been on an earlier page. I dealt with it by adding notations indicating where it should have been in the flow, but I ultimately found the demands of the linear narrative to be too frustrating to continue. So, over the years, the photos ended up in boxes or they remained in the envelopes in which they were delivered after being processed.

That pattern continued until I was in my early twenties and living in Boston. There was an office supply store in Harvard Square that had all manner of wonderful products. They carried small notebooks, that held four-by-six inch card-stock pages. They also had small clip on labels that would affix at the top edge of the spine and that held a paper on which a title could be typed. I bought a couple dozen binders and labels and set to freeing my photos from the tyranny of the orderliness of the calendar, organizing the photos by type, regardless of when or where it was taken or who was in it. Feeling that this was more like how my brain worked, I made books devoted to photos of anyone who had their hand touching any part of their face or head, others of people eating, or in the water, walking dogs, playing a musical instrument, wearing hats, being on stairs or ladders, and even one featuring three or more people on a couch. I continued to note on the back of the photos the particulars of who, when and where.

About forty years ago I drove across the country and on my way back east I stopped in South Bend, Indiana to visit my grandmother, Goldene Greenberger. We sat together  looking at one of her photo albums. It was filled with familiar images, having often seen duplicates or related shots in my parent’s scrapbooks while growing up. There were also quite a few images that were unknown to me. All the while she gave a running commentary on who was in each photo and what the event was. There were weddings, picnics, and birthdays. There were uncles in uniform and babies in strollers, world travels and family visits. The photographs spanned most of the 20th century up to that point.

We encountered one photo that was taken on a merry-go-round in the early 1920s. She told me who everyone was in the photo, but was uncertain of two men. She knew the names of those distant relatives, but could no longer recall which identity belonged to which man. We looked at the back of the photo and there was nothing written on it. I was alarmed – my tenuous and tangential relationship to these men was such that the only person anywhere who would know the answer to the question was the very person who was showing me the photo, and she no longer knew.

The dismay gave way to a calm accepting. I realized that this forgetting was as it should be. What if we were to carry forward every bit of data from three and four generations back? There’d be no room to live our own lives in the present. The generation of my great grandparents is one I never knew. They were presented to me in photos and stories by those who actually did know them. For the generation before that there are only rare photos.

And that scarcity of information is mirrored in the stories that become anecdotes, the lives that are wrapped up in only one remaining know fact about a person. It’s the smaller human movements that allow us to truly feel we know someone. A man in a hundred year old photo who is standing by a tree and holding his hat no doubt had a full life of triumphs and tragedies, skills, secrets, hobbies, and hopes. But all that remains is a photo of a man standing by a tree holding his hat.